The iron sculptures of the Palace gardens
1 October, 2020 / History, Garden

In the second half of the 19th century, Europe was teeming with technological progress resulting from the various transformations that occurred during the so-called ‘Industrial Revolution’.

There are some architectural and structural examples in Porto from that time and also some of which unfortunately only have a few memories left.

This is the case of the Palácio de Cristal, which received its name because it was inspired by the Crystal Palace in everything similar, except in size, which had been built in London for the same purpose, that is, the installation of a universal public exhibition.

But if iron was now used as a raw material in large industrial foundries combined with brilliant engineering and architecture works, it was also beginning to see its potential applied to sculpture. It allowed the same type of detail and finishing of more noble metals, but with greater ease and economy of production, as well as the possibility of series production of pieces created by great masters.

Thus, it is common to have public works in landscaped spaces that by that time were created in European cities, sculpture works in cast iron.
The gardens of the Crystal Palace, unlike the building, have been preserved in their original design and their Sculptures as well. If in the case of the Building and in the structural and technological aspects the origins were English, the cultural and aesthetic fields in Porto and Europe were still dominated by French influences, more precisely Parisians.

Upon entering the main gate, we find the garden that preceded the main facade of the Palace and two fountains adorned with sculptural elements and four figures that represent the Seasons of the Year. It is possible to understand its origins because the foundries where they were produced and in in some cases the author or author of the original modeling.

It is curious to observe, according to a study published by Paula Torres Peixoto in the Revista de Arquitectura Lusitana, that since the Works that represent the Seasons come from different origins, we actually have 3 and not the 4 seasons represented, since the one that it is in its base identified with being autumn, it is actually summer that appears twice.

Following Avenida das Tílias, we will pass through the Concha Acústica and the commonly known as “Fonte dos Cavalinhos”, both with excellent sculptural works in cast iron.

For all this and for all the surrounding space, the “Palace” is and will always be one of the most beloved places in the City. 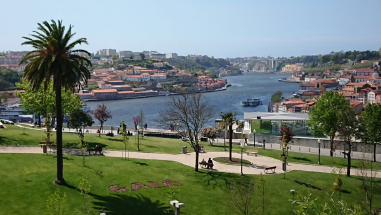 More than a garden, it is a privileged viewpoint of the Rio Douro and the city of Porto. The Jardim do Morro, in Gaia, is a brilliant spot to watch the sunset or to appreciate a casual stroll and enjoy the view.

For those in Porto, the access to this garden on the other side of the Rio Douro, can be
done by metro since there is a station right in front, or by foot through the top deck of the Ponte D. Luís I.

The garden, which has been recently refurbished, lies within in the spot where a hill once stood but ended up being destroyed, so as to build an avenue that connected Gaia to the top deck of the bridge and Porto.

The garden was inaugurated in 1927 and has since then become a privileged viewpoint to Porto. A lake, a cave and, recently, some stone benches have been strategically placed to make it that much more charming. The recent construction work improved the green spaces within it, as well as adding in a bar and other supportive structures.

This garden in Foz do Douro is a tribute to war heroes. It has been recently renovated and is the perfect place to enjoy moments of tranquility.

Until 1914 this square had the designation of Largo da Monte da Luz, since this was the name of that area of ​​the Foz do Douro. However, a war episode would change the name of the place. The German invasion of Liège during World War I, and the heroic way in which the inhabitants of this Belgian city beat each other, have caused a great wave of solidarity in Oporto and in various Portuguese towns. On October 8, 1914 the proposal for the attribution of the name of Praça de Liège at Largo da Monte da Luz was approved.

This garden, known for its great tranquility, was recently renovated, in an intervention that recovered the pavement and the two pergolas. The fountain in the central zone of the garden was also recovered.

Fontainhas – A viewpoint over the river
3 September, 2018 / News, Garden 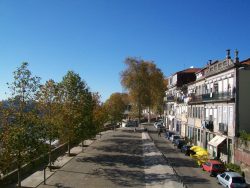 Highly sought after during the São João celebrations, the area of ​​the Fontainhas has a special charm at any time of the year thanks to its the magnificent landscape view.

The trees and stone benches make this the perfect place to enjoy the shade on the hottest days or to watch the sunset.

If you want to venture out, you can go down the steep Rua da Corticeira towards the Douro River. On the way, you will find traces of an old chapel and a ceramic factory. For centuries, women who climbed the slope carrying heavy bales of carqueja (a plant that was later used in the furnaces of the downtown bakeries) walked on this sidewalk.

This is, still today, one of the most distinctive areas of the city and a place where strong bonds of friendship remain. 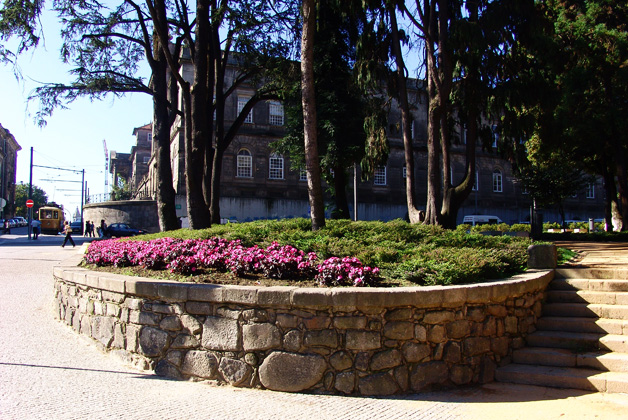 It is considered the last romantic garden of Porto. The bridge that crosses the lake and the lush green trees that surround it create a unique and peaceful environment in a very busy area.

Built in 1897, this garden was designed by the Gardener-Landscapist Jerónimo Monteiro da Costa. The lake, the bridge and trees like cedars, sequoias and araucarias make this green space a pleasant place to relax.

Located next to the Hospital de Santo António, this garden also pays homage to the doctor, professor, researcher and artist Abel Salazar, with a statue by the sculptor Hélder de Carvalho.

The name (Carregal) comes from a plant called Carrega which grew on the banks of the Rio Frio (a River) which started near Torrinha and passed through the place where the hospital Santo António is today.

This square, located in the heart of the historic center, is the ideal place to relax between walks in the city’s alleys and visits to points of interest that surround this garden.

Standing on top of a pedestal, stands the statue which gave this garden its name, and was inaugurated in 1900. The Infante Dom Henrique (1394-1460) was a noble navigator and important figure of the Age of the Portuguese Discoveries. He will have been born nearby, at Casa do Infante.

The Streets of Ferreira Borges, Infante D. Henrique, Mouzinho da Silveira and the Bolsa set the limits of this square which was previously an integral part of the fence of the Convent of St. Domingos.

The privileged location of this square allows amazing views of the surrounding emblematic buildings, such as the Stock Exchange Palace, the Ferreira Borges Market, St. Francis Church and the Parish Church of St. Nicholas.

How to get there: 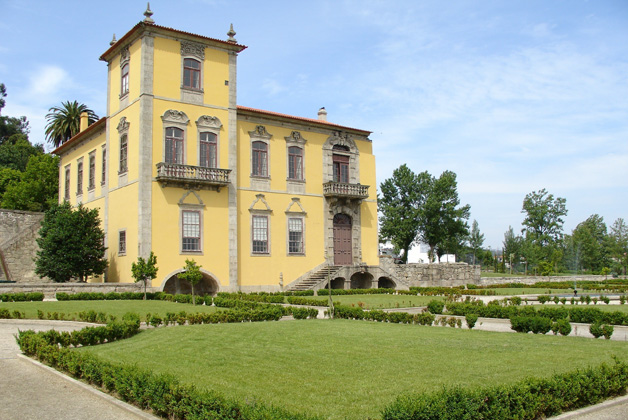 Featuring an eighteenth-century country house, Quinta de Bonjóia is a large space in the eastern part of the city ideal for a delightful family outing.

Occupying an area of ​​roughly 40,000m², Quinta de Bonjóia stands out for its country house, which is said to have been designed by Nicolau Nasoni, architect responsible for the Clérigos Tower. Although the main building has never been completed, this property is classified as a monument of public interest.

The unevenness of the terrain allows you to enjoy a privileged view to the level garden and also to the Campanhã Valley, framed by the river Douro. The gardens and woods that make up this farmhouse invite you to spend some hours appreciating it.

In addition of being a pleasant place to stroll and relax, Quinta de Bonjóia also hosts activities, such as Tai Chi classes, markets dedicated to organic farming and workshops.

More than a garden, it is a privileged viewpoint of the Rio Douro and the city of Porto. The Jardim do Morro, in Gaia, is a brilliant spot to watch the sunset or to appreciate a casual stroll and enjoy the view.

For those in Porto, the access to this garden on the other side of the Rio Douro, can be done by metro since there is a station right in front, or by foot through the top deck of the Ponte D. Luís.

The garden, which has been recently refurbished, lies within in the spot where a hill once stood but ended up being destroyed, so as to build an avenue that connected Gaia to the top deck of the bridge and Porto.

The garden was inaugurated in 1927 and has since then become a privileged viewpoint to Porto. A lake, a cave and, recently, some stone benches have been strategically placed to make it that much more charming. The recent construction work improved the green spaces within it, as well as adding in a bar and other supportive structures.

Entirely dedicated to biodiversity, the Galeria da Biodiversidade – Centro Ciência Viva is so much more than a museum. This modern space, which combines science and art, is made to create unforgettable memories.  It hosts the photographic exhibition Photo Ark up until the end of April 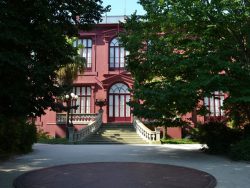 Located in the legendary Casa Andresen – which inspired the renowned Portuguese poet Sophia de Mello Breyner – the Galeria da Biodiversidade is also surrounded by the Botanical Garden, an equally mandatory stop for science lovers, It is a place where art meets biology and natural history, stimulating interactivity and sensorial experiences. The permanent exhibition integrates 49 very unique narrative modules and installations, organized by 15 main themes that approach several aspects within biological and cultural diversity. From mechanical models to multimedia platforms, there are several ways of bringing together the visitor and the stories told through science, literature and art.

Until the 29th April, the Biodiversity Gallery hosts the National Geographic Photo Ark, based on a project from Joel Sartore.  This photographer set a goal 10 years ago: photograph all existing species held in captivity, to create one of the largest archives of biodiversity in the world. This “Photographic Noah’s Ark” is intended to create public awareness towards the conservation of vulnerable animals. The exhibition already pictures over 7000 species and you do not want to miss on seeing its greatest pictures here. 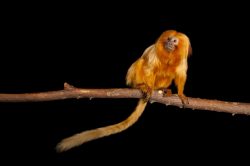 Schedule: from Tuesday to Sunday, 10am to 6pm 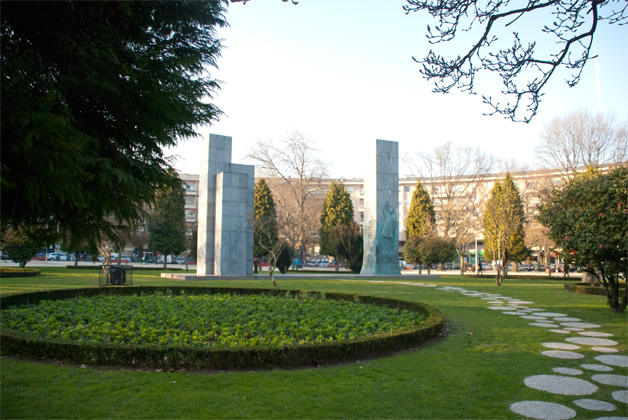 It is one of the most recent green spaces in the city and one of the quietest, despite all the movement around it.

Located in the Antas area and surrounded by several cafes ideal for a family breakfast, this garden was built in 1948. Initially it was designated as Velasquez Square Garden (Spanish painter, 1599-1660), name by which it is still known by the older residents.

Its current name – Dr. Francisco Sá Carneiro Square – honors the former Portuguese Prime Minister, born in Porto in July 1934 and died on December 4, 1980, in a plane crash near Lisbon.

This circular shaped garden has a sculpture alluding to the politician. With ample space for walking, running or cycling, it also has places with shade and benches that invite you to rest.

The former FC Porto stadium (Estádio das Antas, which is now demolished) was very close by, so on football days it was one of the busiest places in the city.

On the third Saturday of each month, an Antique Fair takes place in this garden.