Despite the fact that it was officially founded in December 1834, the Commercial Association of Porto which dates back to the twelfth century, when trade and tradesmen, especially in coastal areas, were gaining more power.

Over the centuries, owing to its strategic location and the entrepreneurial spirit of its people, the city of Porto acquired great importance, becoming an important financial center in Europe and the world. It was at this stage that a shared “Trust fund” was established, created by merchants to cover risks and shipment losses of their commodities. This fund was recognized in 1295 by King Dinis and in 1402 by King John I.

However, until 1834 there was no organization of traders with legal status and competent to meet the needs of local entrepreneurs. At this point, meetings, the exchange of information, business and auctions were held in the “Juntina”, located at the then Rua dos Ingleses. After the Liberal Revolution of 1822 and the enactment of the Commercial Code, the Juntina was the basis of the founding of the Porto Commercial Association, which is currently the second oldest Chamber of Commerce and Industry in Portugal mainland.

To affirm that Porto is the city of work – it is a brand image, certainly adequate and fair, but that does not guarantee, by itself, that all Porto people love the work or that there are not many other lands that deserve the same praise.

In any case, such fame reflects the external recognition that its people are hardworking and that throughout history they have been affirmed by work, that is, by business as opposed to leisure.
However, Porto is not just the city of work.

The Portuguese tradition, corroborating the opinion of 19th century scholars and historical events of ‘national projection’, attributes the epithet of Land of freedom to it, an older and more noble coat of arms than the previous one, which, contrary to hypothetical considerations about a deep lost paradise biblical, not only does not belie it but even complements it.

In fact, work, whether or not it is a consequence or punishment of the original fall, is a condition of success for the common man. 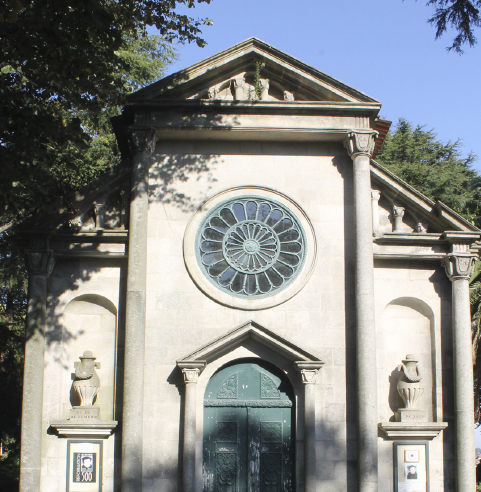 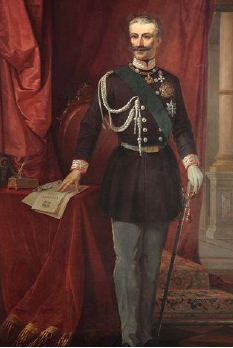 Carlos Alberto of Sardinia was born in Turin, Italy, in 1798. He was King of Sardinia from 1831 and was one of the fathers of the unification of Italy, a country that was divided into several political entities, all more or less controlled by the Austro-Hungarian Empire.

Carlos Alberto wanted to unify all Italy under his scepter, but he had to take refuge in Porto in 1849, after being defeated by the Austrians in the Battle of Novara.

Upon arrival, the dethroned monarch stayed at the Hospedaria do Peixe, operating in the majestic Palace of the Viscounts of Balsemão, in the then Praça dos Ferradores, today Praça Carlos Alberto. There he stayed, until he was offered a place to live. He later moved to Quinta da Macieirinha, where today the Solar do Vinho do Porto and the Romantic Museum are located. There he died.

His body was transferred to the Pantheon of Savoy, in Italy, but the half-sister had a chapel built on the grounds of the farm currently incorporated in the gardens of the Crystal Palace. 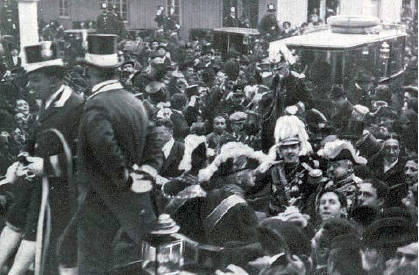 In November and December 1908 D. Manuel II, who would become the last king of Portugal, made a long journey to the north of the country and spent several days in Oporto.

On one of these days, and after his mother, Queen Amélia, having shopped in a large store in the city, the people gathered at Campo da Regeneração (currently Praça da República) for a military parade.

The newspapers of the time headlined that many people went up to the rooftops to watch the parade, however, cars, trams that headed to the place had to turn back due to the concentration of people.

The Royal cortege toured several streets of the Baixa and on Rua de Santa Catarina, they were received with a shower of flowers. At the end of the day a gala dinner was held at Palácio dos Carrancas.
Dona Amelia had a full day, having visited the atelier of the sculptor Teixeira Lopes.
After having traveled several localities of the north, D. Manuel II returned to Oporto, having participated in a soirée at Ateneu Comercial of Porto.
In another tribute to the king, the baths of Praia do Ourigo were named after the King. In October of 1910 the Republic was implanted and the designation was forever forgotten. 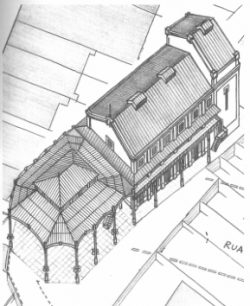 Few remember this movie theater, built at the beginning of the 20th century and demolished in the late 1940s to give way to the current Rua de Ceuta. The Apolo Terrasse came at a time when the cinema was gaining popularity.

At first, the films started out by being projected in shacks or in arge stores in the city, but, as the public’s interest increased and the film production
diversified, specific spaces for film viewing were built. Most of these places of entertainment are now just memories. One of them was the Apolo Terrasse, which was built in 1912. It was located where Rua de Ceuta is today and its main access was through Rua José Falcão. It had two more
entrances: one on the ground floor of a house in Rua de Santa Teresa and another through the middle of backyards that descended to Rua da Picaria. Despite its discreet location and decorative simplicity, the building stood out for its large, imposing iron structure, which served as a vestibule.

The Apolo Terrasse was also built so that it could be used for other types of shows and sporting events.
On the other hand, the two floor construction, connected by two staircases and lateral balconies, brought great concern due to fire prevention.
The lighting, made by globe-shaped lamps, was another element of modernity in this space. 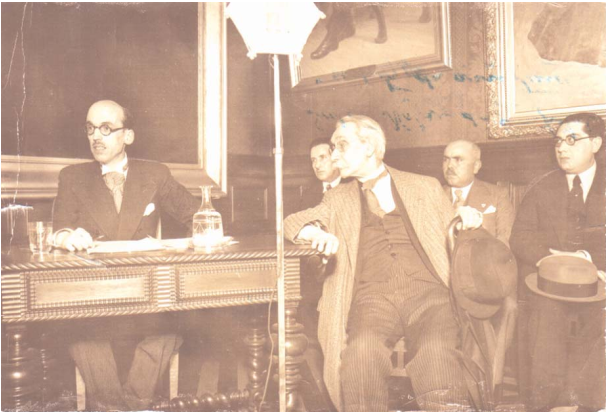 In our city of Porto, a town of great ancestry, the discovery of its origins and the understanding of its urban fabric is, of course, an extensive and endless program. The twentieth century would give us one of the most representative and consistent chronicler and investigator of the history of the city. 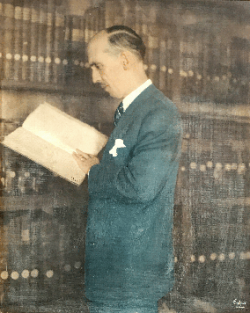 On March 4, 1894 Artur de Magalhães Basto was born at number 556 of the so-called Duquesa de Bragança Street, in a distinctly well-designed house built by his father António José de Magalhães Basto, circa 1875, then architect and professor of the Academy Portuense of Fine Arts José Geraldo da Silva Sardinha.

His training in Law at the University of Lisbon would serve him well in the future, as from a very young age his  interest in research and paleography became apparent , namely through his teaching career integrating him in  the first Modern Language Faculty of the city, where he lectured  between 1922 and 1931. Being part of the City Hall of Porto up to his death, on June 3, 1960, heading as from 1934, the Services of Palaeography and Manuscripts of the library;  and as from 1938 became Director of the Office of History of the City and became head of cultural services,  until 1960. He was also Director of the Porto District Archive from 1939, as well as head of the great Office of the Holy House of Mercy of Porto, since 1933.

But it is as a chronicler of the city that Magalhães Basto would stand out: from his writing would flow the most diverse themes of history and art always linked to the city of which we will give just a few examples: the indispensable “Falam Velhos Manuscritos”, 1445 weekly articles in the Oporto newspaper The 1º de Janeiro “between 1930 and 1960; and his fundamental articles in the magazine of History of the city “The Tripeiro”, of which he would be director between 1945 and 1960. Some of his 160 published works are transcriptions of conferences, one of his specialties, for us worthy of special reference , because of the urgency and style with which he was able to reach out to us all, without discrimination, in a very simple and direct way, his historical narrative and his studies about Our City of Porto. In fact, these lectures would be a way of counteracting the silence, the solitude of “Poeira dos Arquivos”, his natural routine, as he would so well refer to in a February 1960 text: “How boring a life must be, or even a year, a day, or even a single hour, all alone in an arquive, to read, to decipher old paper, crumpled, yellowed by time, gnawed by rats, holed by moth, and stale air.

Our beloved and distinguished researcher died at his last residence, in Oporto, at nr. 500  Gondarém street,  a dignified note left by Professor Luís Duarte in the  exhibition catalogue dedicated by the master in 2005 in the Palace Gallery : “We realize that in the history country, there was a before and after of the magisterium and the work of Artur de Magalhães Basto”.

Gomes Teixeira – The mathematician who could have been a priest
15 October, 2018 / Culture, Curiosities, History, O Tripeiro 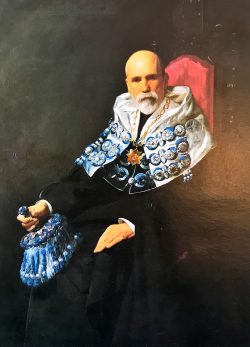 Gomes Teixeira, illustrious mathematician who would become the first rector of the University of Porto, only did not study Theology by mere chance.

Born in January 1851 in Armamar, he was soon distinguished by his intelligence and good grades obtained in all subjects. At that time, it was common for boys with good schooling to be referred to the Seminary, but the young man was also brilliant at Mathematics. Thus, when it was time to go to university, the family decided that it would be the good fortune to decide between Theology and Mathematics.

Luck dictated Mathematics and since he arrived at the University of Coimbra, Francisco Gomes Teixeira stood out by the maximum notes obtained. At the age of 20 he published his first work and in 1874 he finished the course with a grade of 20 values. Such a brilliant academic course would, naturally, have to lead him to a teaching career. He excelled at the University of Coimbra and at the Polytechnic Academy of Porto, which he would eventually direct.

Legend has it that in the place where the Igreja de São Lourenço was built, one could hear the constant singing of the crickets. For this reason, the church is still known today as the Church of the Crickets.

The legend, which has long been known in the city, tells that the Jesuit temple was built in the place where the gardens of the Bishop of Porto, who donated these lands to the Society of Jesus, existed. A place that, due to its abundance of these singing insects, was known as the Campo dos Grilos (Field of the Crickets). Thus, the Porto residents never adopted the official designation of Igreja de São Lourenço and since it was built in the sixteenth century, this temple was always known as … Igreja dos Grilos (Church of the Crickets).

Another explanation, more based on historical facts, is related to the expulsion of the Jesuits from the country in 1759. The church and college belonged to the University of Coimbra, which eventually sold the buildings to the congregation of the Agostinhos Descalços, also known as “Cricket Fathers” since their headquarters was on the Calçada do Grilo (Curbside of the Cricket).

The history of the name may not be consensual, but the imposing facade and the richness of its interior justify a visit.