The day the king visited Porto 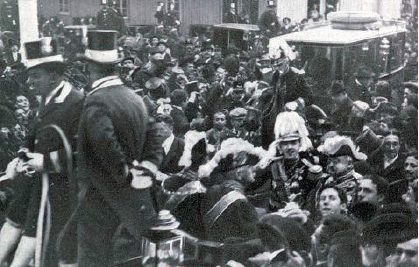 The day the king visited Porto

In November and December 1908 D. Manuel II, who would become the last king of Portugal, made a long journey to the north of the country and spent several days in Oporto.

On one of these days, and after his mother, Queen Amélia, having shopped in a large store in the city, the people gathered at Campo da Regeneração (currently Praça da República) for a military parade.

The newspapers of the time headlined that many people went up to the rooftops to watch the parade, however, cars, trams that headed to the place had to turn back due to the concentration of people.

The Royal cortege toured several streets of the Baixa and on Rua de Santa Catarina, they were received with a shower of flowers. At the end of the day a gala dinner was held at Palácio dos Carrancas.
Dona Amelia had a full day, having visited the atelier of the sculptor Teixeira Lopes.
After having traveled several localities of the north, D. Manuel II returned to Oporto, having participated in a soirée at Ateneu Comercial of Porto.
In another tribute to the king, the baths of Praia do Ourigo were named after the King. In October of 1910 the Republic was implanted and the designation was forever forgotten.