It is one of the treasures of Porto. Located in the historical area of ​​the city, it is distinguished by the Gothic construction and the rich golden carving interior.

The Church of Santa Clara is one of the best examples of decoration with gilded carving used during the Baroque period. Despite being a building of Gothic origin, dating back to the XV century, it has undergone several transformations throughout the centuries, thus lodging various architectural and decorative styles.

The cloister, for example, has Mannerist characteristics, but the concierge and the chancels are already examples of the Baroque of the early eighteenth century. The nave underwent alterations in 1732, in order to enlarge the space and increase the interior lighting. The most significant transformation, however, occurred with the introduction of the gilded carving in the master chapel.

This national monument features the tiles, which stand out, in the area of ​​the chancels, with a panel dating back to 1680, representing the souls of Purgatory.

It is the oldest church in Porto, with origins dating back to the sixth century and a king desperate to save a sick son.

Classified as a National Monument and located next to another larger and more modern church, the Church of São Martinho de Cedofeita, commonly known as the Romanesque Church of Cedofeita, stands out for its simplicity and antiquity.

The present church is not, however, the original building, since the temple dates back to the sixth century and the Suebi Dynasty, undergoing several changes over the years. The earliest remains were from the end of the ninth century, therefore predating the very formation of Portugal, which only occurred in the twelfth century. It may have been after 868 (year of the re-conquest of the city from the Moors) that a temple was built, whose capitals still resist. These elements were built in limestone, probably originating from the region of Coimbra, while the remaining building was made in granite. The lower parts of the chancel would have been built later, dating back to about 1087.

Nevertheless, the Romanesque phase of this important work only appeared later, during the period of the reign of D. Afonso Henriques, the first Portuguese king. In addition to its antiquity, this church has unique architectural and decorative features in this region of the country: particularly important is the tympanum in the North Portal, where one can see an Agnus Dei (a mystical lamb symbolizing Christ in the Apocalypse), quite similar to one that exists currently at the Machado de Castro National Museum in Coimbra. The influences of this region can be explained by the fact that Soeiro Anes worked on this project, which was also connected to the Sé Velha of Coimbra.

The Suebi king Theodomiro, desperate to save his sick son, made a promise to Saint Martin of Tours, sending to Tours gold and silver in weight equal to that of his son. When returning, a bishop brought a relic of the saint, and when it was shown, the sick son healed. Feeling extremely grateful, the king converted all his people to Catholicism and had a church built in honor of the saint. The church was quickly built, becoming known as Cito Facta, which means Made Early. From this expression the present name of that zone: Cedofeita is derived. 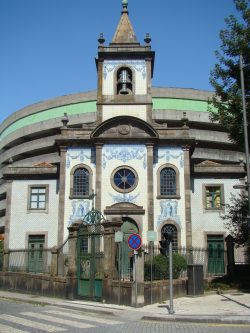 “O Porto a penantes” – Penantes is a typical Porto expression that means “walking” – it is a personal project of Joaquim Lino, who likes to walk and photograph some of the corners of the city. He will be sharing with Hey Porto! readers every month some of these tours, leaving suggestions so that those who visit the city can discover secrets that often, not even the people of Porto know.

Recently, in one of these walks through the city, he entered the Chapel of Fradelos, a small late-19th-century church, located at the intersection of Guedes de Azevedo and Sá da Bandeira streets, which is generally off the main tourist routes but deserves to be known. On the main façade and in the interior there are tiles by Jorge Colaço, the same author of the tiles that decorate the Station of St. Benedict and the Church of St. Ildefonso. The stucco ceiling decorated by gold center medallions stands out.

Cathedral of Porto: the gem of the city
6 March, 2017 / Featured, Monument

The Porto Cathedral began to be built in the twelfth century, but over the centuries it received influences of the Renaissance, Baroque and Rococo periods.

Just the architecture of the Cathedral of Porto is sufficient to be considered one of the jewels of the city. The Gothic initial construction, conspicuous in the cloister and the Chapel of São João Evangelista, together with the singularity of the Blessed Sacrament Chapel and its silver altar. The Baroque of the eighteenth century is present in the frescos of the chancel and sacristy, by Nicolau Nasoni, and in the tiles of the cloister.

The interior of the cathedral is a real treasure, with invaluable furniture, consisting of tables and sinks in rare marble, the mirrors trims, cabinets and a black wood clock in Rococo style.

Outside, the patio of the cathedral is surrounded by the buildings of the Cathedral, the canon house, Episcopal Palace and Town Hall. It is one
of the privileged viewpoints in the city. From that point it is possible to behold the area of Barredo, the River Douro and the city of Gaia.

It is the heart of the city, where heads of state are received, victories are celebrated and important dates such as New Year or St. John are commemorated.

In fact, the space that is commonly known as Avenida dos Aliados and includes Praça da Liberdade (south) and General Humberto Delgado Square on the north side where the City Hall is located. The central location and its dimensions are ideal to welcome thousands of people, being therefore the chosen place to celebrate great moments of the city.

Granite predominates in the buildings, many of them true works of art built during a golden age of Porto. Plans to make this place a public square go back to the seventeenth century, but it would take several years before the works progressed. The agricultural fields gave way to more modern streets, but it would only be in the nineteenth century for this place to become the political, economic and social center of the city. Cafes and taverns occupied a space which later was replaced by banks and offices and today, in addition to terraces and restaurants, it also houses hotels and shops, as well as statues and sculptures that contrast with the water reflection and granite pavement of recent construction.

The works of the avenue began in 1916, with the demolition of the previous municipal buildings. The new City Hall results from a project of the architect Correia da Silva dating back to 1920, but the installations were only completed in the 50’s.

However, in the 21st century, due to the construction of an underground station in the Aliados, the space would once again be remodeled in a project by the architects Álvaro Siza Vieira and Eduardo Souto Moura.