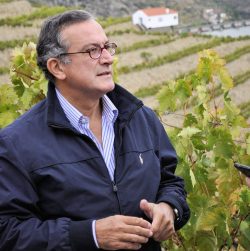 Born in 1960 in this city, where he carries his professional life, excluding the period in which he was head of the office of Minister Valente de Oliveira, in Lisbon. It is from here that since November 2011, he leads the IVDP, Institute of Douro and Port Wines, which supervises, monitors and certifies the quality and quantity of the and Douro wines as well as promotes them and defend the respective designations of origin. Graduated in Law and postgraduate in European Economics by the Universidade Católica Portuguesa, served as deputy director of the newspaper O Primeiro de Janeiro and was an adviser to the of the Fundação de Serralves.

But before arriving at the IVDP he was the Municipal Director of the Presidency of the Porto City Hall for 8 years and many years in the Coordination Commission of the Northern Region.

Getting back to wine, his connection is deeply familiar and institutional as for 4 years he was also Secretary-General of the Assembly of European Wine Regions, and represented the Porto City Hall at the Great Wine Capitals.  This connection is still made through books, rooted and properly cultivated taste; among others, he published “Aspects de la politique Vitivinicole des Régions d’Europe” (3 vols., 2000 and 2001), “Territories of the Wine” (1st edition, 2009, 2nd edition and Mode de Ler, 2010) and “Other Territories of Wine” (ed. Modo de Ler, 2012) and, of course, his frequent and regular participation in newspapers and magazines.

With wine as the center of attention, but with special focus on what the Douro region provides us.

As he considers wine a cultural element, he does not cease to make this connection constantly: he presented this month in July the book Poems of My Life, the 23rd volume of an annotated collection of poems inserted in a collection begun by Mário Soares, which includes authors such as Marcelo Rebelo de Sousa, Vasco Graça Moura or Eduardo Lourenço.

His suggestions are about the city where he lives and knows well. And what good tips he has to give

– Restaurant: I really like going to Ernesto, in Rua da Picaria. It blends really well its old feel with the cosmopolitanism of its clientele. And the walls full of memories, with the cosy good taste of my friend Reinaldo, along with an honest and impeccable kitchen.

– Bar: A Capela Incomum, in Carregal. The place, the friends and the very old memory of the visits (without any success) of the old Conservatory.

– Tour: Is Porto not a romantic city by nature? Let’s do the Caminhos do Romântico! 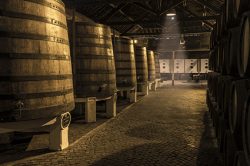 – Ideal place to drink some port wine: Port wine, by itself, at the right temperature and in the glass, transforms any place. I suggest, of course, the atmosphere of the Port Wine Cellars, in Vila Nova de Gaia.

– A secret of the city that you can reveal: The heart of D Pedro, in the Church of Lapa, whose keys are shared by the Ombudsman of the respective Brotherhood and the Mayor of Porto – only accessible to some and in very rare moments.

And if being a bit eerie: Why not circle through the cemeteries of Porto, like the catacombs of S. Francisco, or “hanging out” with Camilo Castelo Branco or Arnaldo Gama in the cemetery of Lapa? And if you go there, ask to see the pistol with which Camilo committed suicide in 1890 in S. Miguel de Seide.

One last tip: Do not forget to visit one of the lesser-known and most notable Houses of Porto, the former Banco Comercial do Porto, currently the Douro and Porto Wine Institute, in Rua Ferreira Borges where you can with a glass of Port in hand.