The tradition of the Christmas eve dinner in Porto

The tradition of the Christmas eve dinner in Porto

Christmas traditions have always had a very special meaning in the families of Porto, but 100 years ago it was all a little different.

The Christmas Eve dinner (dinner on the 24th of December) only existed in the north. In the south of Porto, from Advent, families fasted meat, and this day was spent in strict fasting. Only after the “Missa do Galo” (rooster’s mass) was the supper served.

Porto already followed the tradition of the Middle Ages, with the Christmas Codfish. The family gathered at the table to celebrate the “Consoada” (Christmas Eve), which comes from the verb consolation.

As one could not eat meat, and the codfish was the cheapest fish, the meal consisted of boiled codfish, accompanied with boiled cabbage and potatoes, watered by a good extra virgin national olive oil; the codfish pastries, the stewed octopus, or the octopus rice were other of the most chosen meatless dishes.

But since the 2d World War, only the richest families continued to be able to consume codfish on a regular basis, and for those the codfish became only for festive days.

There is a legend that in Toledo, before the 12 chimes, the farmers killed a rooster, which they took to church to give to the poorest, to have a happier Christmas. So the meat was reserved for Christmas Day (25 December) with the stuffed turkey being the king of this day.
The “Missa do Galo” was not part of Porto traditions, as family life should not be interrupted. In the north no one prayed for Child Jesus at midnight, because at that time everyone was around the octopus and the codfish. 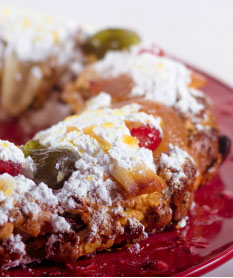 For dessert, the Christmas “broas de natal” stand out, and later the famous “Bolo-rei”, in a round shape, with a hole in the middle. Traditionally, inside the cake there was a dried bean, and a small gift made of metal or ceramic. Whoever got the dried bean had the duty to pay for the next Bolo Rei, and the gift was lucky for whoever found it.

Behind this cake there is a symbolism about 2000 years old. The legend says that the cake represents the gifts that the Wise Men gave to the Child Jesus. The crown symbolizes gold, the crystallized and dried fruits are myrrh, and the aroma of the cake is incense.

This tradition was imported from France, from the court of Louis XIV, where this cake was made for New Year’s Eve and Kings Day celebrations. The Bolo-rei arrived in Porto in 1890 by the Confeitaria Cascais (pastry shop).

Another dessert that a Porto native does not dispense on Christmas Eve is “Aletria”. It has Arab origin and was made with fine pasta, almond milk and honey. It is usually covered with drawings made of cinnamon.

Also the “Rabanadas” are a sweet delicacy in the house of the Porto’s families. Here it is customary to get them drunk with port wine. In the south they are called “Fatias Douradas”.
The first recipes date back to 1611. In the early 20th century they were very common in Madrid, where the recipe came from.
Port wine is the nectar of the Porto’s Christmas, and it is always a good time to drink, buy and offer. Without ever forgetting the choice of the best wines to put on the table in these festivities.