Eugénio de Andrade, one of the most translated Portuguese poets, kept a strong connection to Porto for much of his life.

Although he was born in Fundão, Eugénio de Andrade (whose real name was José Fontinhas), lived in Porto for more than 50 years, until his death on June 13, 2005. He arrived in Oporto in the 50’s. At that time and although he already had written works, his position was an administrative inspector of the Ministry of Health and it was for this reason, following a transfer that he came to live in the city. Later he would receive the title of honorary citizen.

Author of several works that earned him national awards and international distinctions, he was also a translator of works by authors such as Federico García Lorca and Jorge Luís Borges. Among the several poetic anthologies of which he was the author, the one dedicated to Porto (Daqui Houve Nome Portugal, 1968) stands out. Although he cultivated s 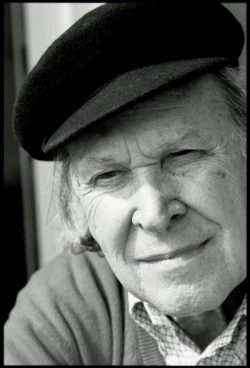 trong relations of friendship with other writers and artists, he was discreet. He did not like to give interviews or attend social and cultural events.

He lived for many years at 111 Rua Duque de Palmela, but from 1994 until his death he lived in the Casa Serrúbia, in Rua do Passeio Alegre, in Foz do Douro. This house would become the headquarters of the Eugénio de Andrade Foundation for some time. His manuscripts and other documentation are currently in the Special Collections Room of the Municipal Public Library of Porto.

Not far from here, in the Prado do Repouso Cemetery stands the tomb of Eugénio de Andrade: a white shallow marble grave, designed by his friend Siza Vieira, in which verses of his book “The Hands and the Fruits” are inscribed.

“The wisdom of the poet is a second innocence”