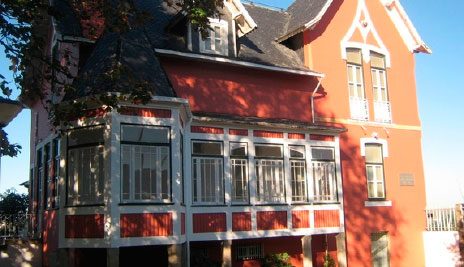 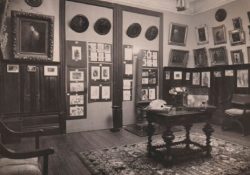 Located in S. Mamede Infesta, it is a construction from the end of the XIX century. An 17th century chapel is attached, which served as a workshop for the patron. It was in this house that the last years of existence of the Portuguese scientist and professor passed.
In the permanent exhibition of the house, in addition to the collection of paintings, drawings and prints, there are utensils and scientific writings by Abel Salazar, as well as original pieces of furniture from the house.

The Casa-Museu restores part of the patron’s family atmosphere, through personal objects and portraits, as well as testimonies of the activity of the researcher, pedagogue and disseminator of civic interventions, through letters, manuscripts, typographic proofs, newspapers and magazines where he collaborated.
The doctor’s library and the Alberto Saavedra library are also located in the house, with a specialized documentary background on the life and work of Abel Salazar.

In the garden, there is the Calouste Gulbenkian Pavilion, with a regular program of exhibitions with contemporary artists.
It was Abel Salazar’s friends and admirers who, after his death, thought that the greatest tribute they could pay him was to transform his home into a foundation.
Several initiatives were undertaken to raise funds in the task of defending and publicizing the Work of Abel Salazar, including the purchase of the house for transformation into a museum. But it was only almost 11 years later that the “Sociedade Divulgadora da Casa-Museu Abel Salazar de S. Mamede Infesta” was created.
However, the difficulties continued and the Sociedade Divulgadora appealed to the Calouste Gulbenkian Foundation, which acquired, in 1965, all artistic, literary and scientific work and the property and l 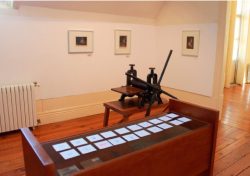 and attached to the Casa-Museu.
During the period that belonged to the Calouste Gulbenkian Foundation, the house was closed to the public for restoration works, construction of the guardhouse and the pavilion for periodic exhibitions.
In 1975, the Foundation was no longer able to assume the responsibilities of the House and raises the question of the Casa-Museu being donated to the University of Porto, which was superiorly authorized to accept the donation.

The Abel Salazar House-Museum, under the supervision of the University of Porto, is run with the support of a Sociedade Divulgadora, a cultural entity and considered to be of Public Utility. Centered on the human, social and artistic value of the patron, the Casa-Museu aims to stimulate interest in the work of Abel Salazar in the different branches he cultivated, to activate the publication of studies around the different skills of the scientist, to foster collaboration with schools and cultural and recreational organizations, to complete the work of inventorying and investigating the literary estate both published and unpublished, assuming itself as an irreplaceable information and research center for the artist and scientist Abel Salazar.