The Church, the Convent and the São Gonçalo Bridge, are the “ex libris” of the city of Amarante, inseparable from the figure that gives them the name. The myriad of legends and beliefs that gravitate around this place blur the reality at a crossroads of such cloudiness that throws us into the impossibility of accurately discerning where they end and the other begins. “Gonçalo was a saint, and an admirable saint, in the early age of a boy; holy and admirable in the second of the youth; holy, and admirable in the third of men; holy, and admirable in the quarter of old; and finally holy, and admirable, on the fifth after death ”(excerpt from a sermon by Father António Vieira in Brazil. 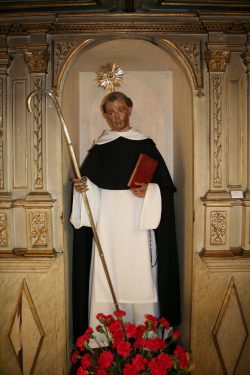 São Gonçalo de Amarante was born around 1190, in the parish of S. Salvador de Tagilde, in the municipality of Vizela, in a noble family (the Pereiras). Under the protection of the archbishop of the Archdiocese of Braga, Gonçalo attended ecclesiastical disciplines at the Cathedral School of the Archiepiscopal See, becoming ordained priest and appointed parish priest of the parish of S. Paio (or S. Pelagius) of Riba-Vizela. He first went on pilgrimage to Rome from where he went to Jerusalem, where he took 14 years, leaving the parishioners in the care of a nephew priest. Returning to Portugal, he is chased away by the same that through a plot would have been named like parish priest. Resigned, he leaves S. Paio de Riba-Vizela, joins the conventual life of the Order of Preachers, recently founded by S. Domingos, building a small chapel dedicated to Our Lady of the Assumption, on the banks of the River Tâmega. where today stands the São Gonçalo Church and Convent in Amarante. The process of beatification was promulgated on September 16, 1561. Devotion to the most popular saint of the Portuguese saints, after Saint Anthony of Lisbon, spread throughout Portugal and Brazil. In 1540 John III of Portugal and D. Catarina of Austria decided to build a new Dominican temple and convent on the site, under the invocation of Gonçalo de Amarante. The works began in 1543, extending to the eighteenth century, with interventions in the twentieth century.

São Gonçalo, in the sec. XIII, begins the construction of a crossing between the two banks (it is during this period that an immensity of legends appears). The bridge collapsed in the 18th century due to flooding and was later recovered. The famous defence of the Amarante Bridge took place in 1809 and was one of the most remarkable moments of the second French invasions. The heroic defence of the bridge, as the episode became known, came after French troops occupied the Church of São Gonçalo and were prevented from crossing the Tamega. More than 200 years have passed, but cannonball and musket marks still linger on the building’s facade.