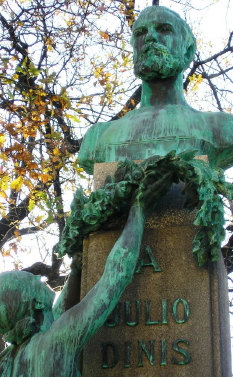 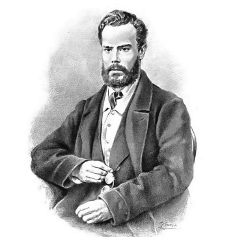 He studied in Miragaia where he wrote the first literary texts, and studied medicine at the University of Porto. In 1852 and 1853, he lived in the village of Noêda, in the parish of Campanhã. In 1874 the writer moved in with his cousin’s family to Rua de Costa Cabral, in the parish of Paranhos, where he would later die of tuberculosis – he was 32 years old.

When he attended the first year of the Polytechnic Academy, he became acquainted and maintained an intimate friendship with the poet Soares de Passos, and from this circumstance he intensified his love of beautiful letters. He also participated in theater groups, and collaborated with Jornal do Porto.

In his books “Os Fidalgos da Casa Mourisca”, “A Morgadinha dos Canaviais” and “Uma Família Inglesa” we can find many references to the city where he was born, lived and died.

A sculptural ensemble, with a female figure who places a wreath near the poet’s bust, in low relief. He was buried in the cemetery of Cedofeita, together with his brother.