The centre of Porto’s student life, this square is named after an illustrious mathematician, but it is the lions of its imposing fountain that have made it known.

The official designation of this square in Baixa do Porto is homage to Gomes Teixeira, a mathematician who was the first rector of the University of Porto. However, it is best known for the Praça dos Leões (Lions Square), due to the granite and bronze fountain that exists in the central zone.

In fact, this place dates much earlier than the fountain and even the university itself. According to legend, in the 12th century, the first king of Portugal, D. Afonso Henriques and his wife, D. Mafalda, were on their way to Guimarães when the queen fell on a precipice. In that moment of distress, each element of the couple invoked a saint. Grateful for having rid themselves of the danger, they built chapels in that place, Nossa Senhora da Graça and São Miguel-o-Anjo (already demolished).

Already in the XVII century the Convento dos Carmelitas (where the GNR barracks is nowadays) and colleges where orphans were housed, which led to this place was also known as Largo do Carmo or Campo dos Meninos  Órfãos. Later, and because flour and bread were sold there, it was also known as Praça do Pão (Bread Square) or Praça da Feira do Pão (Bread Market Square). Already in the XIX century, it became Praça dos Voluntários da Rainha, thus honoring the liberal battalion of the Portuguese army that had occupied the Convento dos Carmelitas.

When the University of Porto was created, it was renamed Praça da Universidade and, later, Praça Gomes Teixeira.

The current building of the Rectory of the University of Porto was built throughout the nineteenth century and it also served as the Faculty of Sciences and Engineering. The square then gained a new life; the presence of the students was decisive for the emergence of cafes, such as the mythical Café Âncora d’Ouro (better known as O Piolho), bookstores and other services linked to academic life. The shops and warehouses nearby also created, along with the people of Porto and who visited the city, the habit of shopping in this area.

Nowadays it is one of the main places in Porto for nightlife activities and it continues to be a meeting point in the main moments of the academic life of the city, such as Queima das Fitas or the Reception to the new students of the University of Porto.

The churches of Carmo and Carmelitas, separated by the narrowest house of the city, are another point of interest in the place. 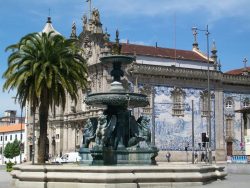 Imposing, this emblematic source was commissioned by the Companhia das Águas do Porto in 1882, with the purpose of supplying water to that area of ​​the city. Built in France by the Compagnie Générale des Eaux pour l’Etranger, it is 8 meters in diameter and 6 meters high, consisting of a granite tank and a central bronze fountain with four winged lions and seated at the ends. Two cups on the top complete the decoration of this fountain, once protected by an iron fence.