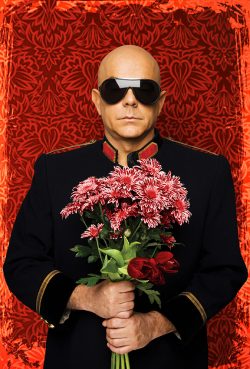 He is one of the greatest names of Portuguese music. It was with the album “Viagens” in 1994,that he was made known to the general public, having won the success and affection of many who maintained it until today through a total of 7 original works.

He is Pedro Abrunhosa. He was born in 1960, started in classical music studies, was a teacher (from the age of 16) and bass guitarist of Jazz having founded the Escola de Jazz do Porto (Oporto Jazz School) and his own Orchestra. He is known for always wearing his sunglasses but mainly for many successes in the last 25 years of Portuguese music, such as “Tudo o que eu te dou”, “Momento”, “Se eu fosse um dia o teu olhar” – song composed for the soundtrack of the film “Adam and Eve” by Joaquim Leitão – “Toma conta de mim” or “Fazer o que ainda não foi feito”. His songs are interpreted in Brazil by names like Caetano Veloso (who invited him to present a show together at Expo98), Maria Bethânia, among many others. He also composed for other musicians, like Ana Moura, Carlos do Carmo or Camané. In 2004 he was one of the artists who closed Rock in Rio which was held for the first time in Lisbon. In addition to the 7 studio albums, he released two DVD’s: “Intimidade” in 2005 and “Coliseu” in 2011.

In addition to being a songwriter, Pedro Abrunhosa has appeared opposite Chiara Mastroianni in Manoel de Oliveira’s “A Carta”, 1999, and is a regular chronicler in various media outlets. In 2005 he founded the BoomStudios, recording studios for himself and for other national and international music names. He won several awards: 3 Golden Globes, the Bordallo Press Prize, the SPA Prize – Pedro Osório, 4 Blitz Awards, and many others.

In 2016, Pedro Abrunhosa was the author responsible for the song of support for the National Football Team at Euro2016 in France, with an adaptation of the song “Tudo que te dou”.