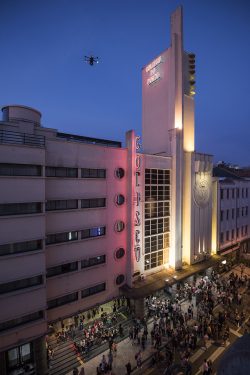 In Porto’s imaginary, the Coliseu do Porto occupies a very special place and is, without detriment to the others, the first showroom in the city, perhaps because it has been regularly and from the beginning involved in controversies.

Whoever is in the city center and crosses Praça D João I, on the east side sees Rua Passos Manuel. Going up on the left side, you come across a modernist building whose exterior does not reveal the singularity of its interior. This is the Coliseu do Porto.

For decades this area of ​​the city has been the center of entertainment and nightlife in Porto. In the neighborhood, there was, and coexisted, most of the city’s concert halls: From the sadly celebrated Bachet theater on the street of Sto António, which on 20 March 1888 burned in a dreadful fire during a rite with more than one hundred fatalities ; The later theater of Sá da Bandeira, rebuilt in the same place as Bachet and which still has its doors open; The theater of S. João à Batalha, also victim of another fire, this time empty, in 1909, and later rebuilt with the risk of the architect Marques da Silva; and also the curious Jardim Passos Manuel lounge, opened in 1908 and built just below the Coliseu, on the street of the same name and which had an ephemeral life for three decades.

The idea of ​​building a large concert hall in Porto dates back to the beginning of the 20th century, but it was not until the early 1930s that a group of notables from the city encouraged the administration of Companhia de Seguros Garantia to design and materialize the Coliseu.

About the dismantling of Jardim Passos Manuel in 1938, the Coliseu was built. The first architectural studies are by José Porto. Artist without academic training but with eclectic knowledge of construction. The risk of the main room is yours. Then came the collaboration of Yan Wills, Dutch and belonging to the modernist movement De Stijl. Although he elaborated several studies, none was carried out on site.

Initial hesitations in the program and a lead from the Aesthetics Committee of the Porto City Council led to the removal of the third designer – Arch Júlio de Brito- who had replaced colleagues José Porto and Yan Wills, who had already been consumed in the maelstrom of changes to the project and variations of language.

In 1939, the insurance company Garantia hired the services of Arqº Cassiano Branco (1897-1970), then a rising star in the Portuguese architecture world of the 1930s. In the short space of two years, Cassiano finished the work, although in I disagree with the prosecutor, who dismissed him by letter on October 10, 1940, for “very serious errors and deficiencies in the works”. Without prejudice, it was Cassiano who most marked the general image and above all the exterior image of the Coliseum. His performance for the whole of the work was decisive to the point of being able to attribute the authorship of the building that is there.

Meanwhile, at the invitation of Cassiano Branco, Frenchman Charles Siclis also collaborated by introducing some changes to the interior of the building, namely the design of doors and lamps.

The last architect to work at the Coliseu was Mário de Abreu. That made changes to several elements, namely the alteration of the tower designed by Cassiano, which initially envisaged the assembly of colored neon lighting elements and which he removed.

Finally, on December 19, 1941, just two years after the beginning of the work, Joaquim José de Carvalho, chairman of the board of directors of the insurance company Garantia, solemnly inaugurated the Coliseu, with the recital of a concert by the Orchestra of the Issuer National directed by maestro Pedro de Freitas Branco. Then there was a ball in the Atrium. About the date, the writer at O ​​Comércio do Porto wrote: “the modern, comfortable, elegant and well-succeeded tendency of the building”. And yet “the facade to which Cassiano leaves his name attached contributes to making the Coliseum a big box of surprises”.

The building plan shows affinities with the organization of the famous Teatro Total by Walter Gropius. There are also formal affinities with the post-World War I German and European functional movement. The room has a capacity of 3000 seats. In addition, it has a large bar next to the audience on the ground floor, a complementary room, with capacity for three hundred people and dedicated to medium-sized events, and on the top floor, a restaurant with a terrace with a good view of the city.

The interior of the Coliseu is magnificent in its fluid forms and organic circulation. The seduction of the circular room is difficult to describe in words, but evident to those who visit it. The friezes and cabins follow each other on several floors, ending at the upper level, involving the circular audience on the ground floor vertically.

Among so many artists who performed there, the following stand out: Fado singer Amália, pianist Sviatoslav Richer; the best clown in the world Popov; Rudolf Nureyev; the father of Portuguese rock Rui Veloso; Miles Davis or diva Claudia Schiffer.

In 1991, the Sala celebrated its fiftieth anniversary with a large tribute concert, in which the inaugural concert was replicated. He was a soloist, pianist and teacher Helena de Sá e Costa, accompanied by Pedro Burmester and conductor Jan Koenig, conducting the Porto Regie-symphony Orchestra.

In the mid-90s, the owner of Coliseu do Porto was Empresa Artística SA / Aliança group -UAP. There is a need for improvement works, as well as to face increasing current running costs of maintaining such a large building. In this context, news of the eventual sale of the Coliseum to IURD, commonly known as Universal Church of the Kingdom of God, with roots in Brazil, which had recently bought the emblematic Império cinema in Lisbon, to convert it into a cathedral, in the general passivity of from Lisbon.

Anonymous Portuenses and the city’s artistic agents came together spontaneously and, in a single gesture, they took to the street one morning in August, speaking out loudly against the deal and the closing of the Room, shouting “Coliseu is ours”. In the collective memory was the image of the singer Pedro Abrunhosa handcuffed to the bars of the Coliseu, surrounded by a small crowd who was shouting at the refusal of the deal. Everyone was not too much to continue the Coliseum.

Riding the wave of solidarity that was generated, the owners dropped the IURD business. In turn, on November 17, 1995, the Associação Amigos do Coliseu do Porto was set up, chaired by Mr Eng José António Barros, representing the owners, adding to the new association numerous institutions and anonymous citizens of the City.

In the meantime, the deed of purchase and sale became the property of the association Amigos do Coliseu do Porto. A few days later, after a Portugal Fashion show, a fire broke out on the stage, destroying it completely. A new wave of solidarity is generated, with ample monetary contributions from institutions and individuals, which allowed the Coliseum to reopen in the same year.

Meanwhile, new maintenance works were carried out introducing some technical improvements to the stage infrastructures. Thus, on November 24, 1998 the Porto Coliseum was reopened, giving a recital of the opera Carmen, by Georges Bizet.

With this history of almost eighty years, it is certain that the Coliseum will remain in the future as the great theater of Porto. Hopefully away from controversy, as has happened in the past. It will certainly last in the heart of the people of Porto.