Costa Brothers Portuguese sailors, to the conquest of Tokyo

Costa Brothers Portuguese sailors, to the conquest of Tokyo

The Costa brothers, as they are known in sailing, Pedro and Diogo, are 24 and 23 years old, respectively, and achieved the last wave of access to the Olympic Games in the World Championship of the Olympic Class held in Vilamoura. In the same championship, they were also vice world champions.

They are Engineering students from FEUP, born in Porto, and have been sailing since they were 6 years old. They only joined in 2012, and in 2014 they started competing internationally.

They were two-time 420 national champions in 2015 and 2016 and that year they achieved a historic achievement for Portugal, they won the 420 World Championship in San Remo.

After the 420 World title, they started the Campaign for the Tokyo Olympic Games and they achieved this feat in Portugal, Vilamoura, at the last opportunity, having, in the medal race, achieved the silver medal. The whole fleet of this world championship is qualified for the 2021 Olympic Games. 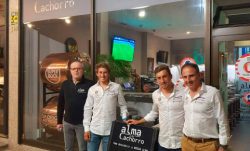