Hey Porto spoke with Frederico Guidiceandrea, onde of the exhibition curators and a major expert on M.C. Escher’s work

– What can people expect from this exhibition in Porto?

The exhibition covers the entire artistic career of MC Escher, starting from the early works that reflect the influence of his teacher, Jesserun de Mesquita, a major exponent of the art nouveau in the Netherlands. An important space is dedicated to the italian period, the nocturnal images of Rome, the southern Italian landscapes and studies of nature.

In the following sections the most famous works are represented: the tessellations, the impossible buildings, ribbons, regular solids, reflecting surfaces and metamorphosis. The exhibition continues with occasional works that MC Escher created on commission such as bookplates, greeting cards, postage stamps and more.

The exhibition closes with a large space devoted to the Eschermania. Here, evidence of the influence of MC Escher on the iconography of the 20th and 21st century. Book covers, psychedelic posters, LP covers, comics, magazines, videoclips and works of contemporary artists who were inspired by MC Escher.

Throughout the exhibition a series of experiential games leads the visitor into the world of MC Escher. They experience the paradoxes of perception encoded by the laws of Gestalt and  physically enter into some of MC Escher’s works. 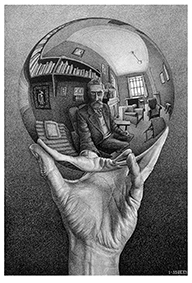 – How would you define Escher’s art?

The art of MC Escher can be interpreted in layers. At first wonder prevails, then if you look deeper you will discover more and more details: paradoxes of perception, mathematical structures, references to the Italian landscape and to the great artists of the past. Every time I set up an exhibition, even having seen the works hundreds of times, I always discover something new.

– Which are his main references?

The main influence especially in his early work is certainly to be found in the art of his master, Jesserun de Mesquita, who was an important exponent of the Dutch Art Noveau. Later in Italy he came into contact with exponents of Futurism, in particular with the art movement called ‘Areopittura’ who loved to depict scenes and landscapes from above with an unusual use of perspective. In the later works the greatest influence came from the contacts with the world of mathematics, especially the correspondence with important mathematicians such Roger Penrose or Harlod Coxeter were the basis of many of the iconic works.

– Escher is intriguing, disturbing, disconcerting, a true genious. Do you agree?

Yes, his work captures many of the trends in the technological society. Modern scientific theories such as the theory of relativity and quantum physics have profoundly changed the way we see the world. The world is not as it appears, on a very large or very small scale it can be very counter-intuitive and paradoxical. MC Escher, through his tessellations and impossible structures, opens a window that allows us to grasp the complexity of the world.