The Bridges that no longer exist… 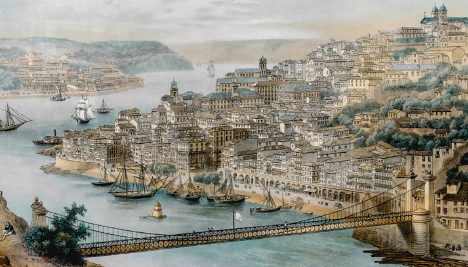 The Bridges that no longer exist…

For many years, the crossing of the river from one bank to the other was made with the help of rafts and boats. 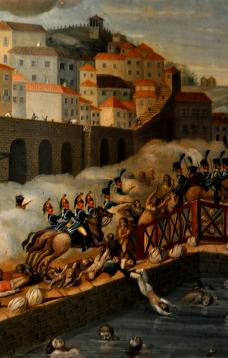 It was only in 1369 that a walkway was inaugurated consisting of boats, an iron chain that joined them and a wooden platform on which people walked.
But there was one major drawback, whenever the water levels of the river rose due to heavy rains, the improvised bridge was destroyed.

The somewhat more sophisticated Ponte das Barcas was built for longer-lasting purposes, designed by Carlos Amarante and inaugurated on the 15th August 1806.
This was considered the first bridge that connected Porto and Gaia.

It was made with 20 barges placed in parallel, connected by steel cables, and supporting a series of wooden planks, with two openings for river traffic, so that boats going up and down the river could pass. Furthermore, it was a collapsible bridge, so it could adapt as the currents of the Douro increased or decreased.

This innovation only arrived in 1806 but it had its end in 1809, the idea was short-lived.

On 29 March 1809, during Napoleon’s Second French Invasion, when General Soult’s army was marching on the city with the intention of destroying it, the desperate population rushed towards the river to cross over to the Gaia side.

With the amount of panicked people on the bridge, it collapsed. The central trapdoor opened and the bridge collapsed.

After the Ponte das Barcas tragedy, another bridge had to be built.

This bridge was built in 1843 and was named D. Maria II, but popularly became known as Ponte Pênsil, because as the name indicates, it was built on the suspension system or supported by iron, which rises 10 meters above the average water level, and allowed a span of 170 meters,.

The Ponte Pênsil – officially D. Maria II – is a beautiful work for the time, by the engineers Bigot and Mellet.

This was the first fixed construction built under the Douro River, and it was active for about 45 years, until it was replaced by the Luiz I Bridge, which was built next to it.

It was inaugurated in 1842 and demolished in 1887 to make way for the bridge that honoured the king of the time: D. Luís I.