The 1st Christmas Tree of the Portugal was in Porto 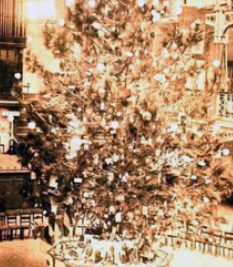 The 1st Christmas Tree of the Portugal was in Porto

According to history, it was in Porto that for the first time a Christmas tree was built in the country.

The legend says that it was chosen as a Christmas symbol for its triangular shape, which in Christian tradition represents the Holy Trinity: Father, Son and Holy Spirit.

The Christmas Tree or Christmas Pine has been known in its present form since the 16th century.

It appeared in Germany where small pine trees were decorated with colourful fruit and sweet paper.

The tradition spread throughout Europe and arrived in the USA in 1800.

The nativity scene is a tradition in the home of the Porto’s Christian. There are records of cribs since the 13th century, created by St. Francis of Assis in 1223, in a cave in Assis, and its present form dates from the 16th century. Normally set up at the foot of the Christmas tree and the presents, it recreates the birth of Jesus in a stable.

Christmas is a magical time to visit Porto, a city full of traditions and craft wonders, delicious traditional wines, and enjoy the festive atmosphere.

On Christmas Eve, the family from Porto gather around the Christmas tree and the nativity scene.