Was the Circunvalação used to collect taxes?

This road that surrounds Porto is 17 kilometers long, between the zone of Campanhã and the sea. It was strategically built and it had 13 posts to collect taxes on goods entering Porto.

The construction of the Circumvallation Road (National Road 12) began in 1889 and was based on a military design; there were ditches (moats) with 2 to 3 meters of depth in the place where the central slab is now.

Its main objective was to inspect the goods that entered the city overland, charging the respective taxes. Along the road there were 13 small buildings (Esteiro, Freixo, Campanhã, São Roque, Rebordões, Areosa, Azenha, Amial, Monte dos Burgos, Senhora da Hora, Pereiro, Vilarinha and Castelo do Queijo) in which employees of the Crown, Bishopric and the Municipality charged their respective fees. For example, the tax named “Real da Agua”, focused on meat, alcoholic beverages, rice, vinegar and olive oil was abolished in 1922. The revenue was allocated to the maintenance of pipes, fountains and aqueducts that supplied water to the populations. In 1943 all indirect municipal taxes were abolished.

Many of these collection posts have been demolished, but some still stand.

The geographical proximity, especially with Galicia, has created conditions for ages the presence of strong relations between the Spaniards and the city.

The origins of Porto and Galicia are shared since the first century AD, when the area north of the Douro River was inhabited by the Celtic people. When the Iberian Peninsula was conquered by the Arabs, many inhabitants took refuge in Galicia and only after the re-conquest of the peninsula by Christian realms Porto was repopulated. The first bishop of Porto had been canon in Compostela; the first charter of Porto was granted in 1124, even before the establishment of Portugal as a country.

Between the sixteenth and seventeenth centuries, trade with Galicia was intensified. Subsequently, trade would be extended to more distant cities, such as Andalusia, Castile and Barcelona. The emigration between the two countries was motivated by political and economic reasons, which was constant throughout the centuries. The liberal Portuguese revolution in (1820), which had its epicenter in Oporto, was greatly influenced by the Spanish revolution. The first Spanish vice consul arrived in the city in the mid-eighteenth century and in the nineteenth century the Spanish colony in Oporto represented roughly 60% of the total number of foreigners. 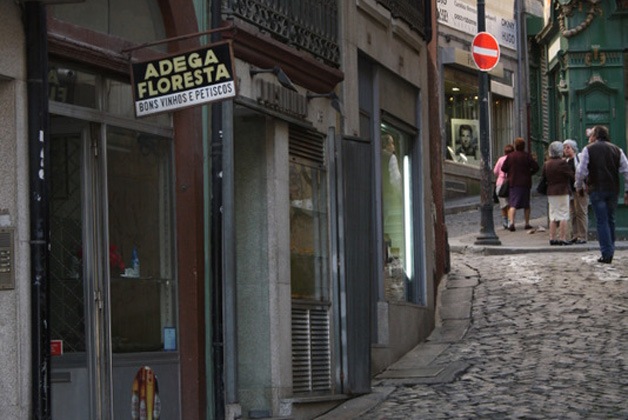 It is only 30 meters long and is called Rua Afonso Martins Alho, named after a merchant of the fourteenth century.

This small street is between the Rua de Mouzinho da Silveira and Rua das Flores and is named after a merchant sent by King D. Afonso IV to negotiate with the court of Eduardo III the first commercial treaty between Portugal and England, in 1353.

The city began to grow in the medieval period, having grown from the area along the Douro River. Because of this, many of the streets in this area are still small and narrow. In fact, more than 30% of the streets of Porto are less than six meters wide and 40% of the roads are one-way.

It was in the 18th century, on the initiative of the urban planners João de Almada that the city, as we know it today, began to take shape. Until then, Porto was practically limited by the Gothic wall, extended by small rural parishes and the fishing zones near the margin of the Douro river. During this time streets such as the streets of São João, Santa Catarina and Santo Ildefonso were extended. After his death, his son, Francisco de Almada, continued this work of urbanization and modernization of the city.

In the area of ​​the choir there is a pipe organ of the early nineteenth century, which has been restored. The church also has vestiges of an old cemetery, discovered during the restoration works of recovery executed in 1996.