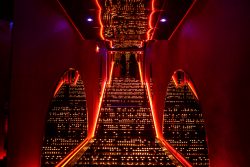 Pérola Negra regains the spirit of the 80s and 90s nights in a space that has an aesthetic “retro”, burlesque and where fun is guaranteed.

It is one of the latest nightlife venues in the city of Porto. Pérola Negra, which for more than 40 years served as a nightclub for male audiences, and has maintained the decoration where dark wood predominates, the walls with mirrors and red-lined benches around a dance floor with stage and crystal ball.

Today it is a place of diversion for several generations, located downtown and, therefore, ideal for a well-spent night. In addition to this new concept of “a space for everyone”, Pérola Negra also focuses on recovering the spirit of the nights of the 80’s and 90’s, when the night began with the opening of the dance floor, with smoke effects and a specific song. Then, as the hours pass, the music changes to more recent songs and the dance floor is overrun with the latest dance music hits.

Between February 20 and March 4, the Porto-Fantasporto International Film Festival will be showing 132 films from 35 countries, including world premieres.

Ranked among the top 10 independent festivals in the world, Fantasporto is part of the city’s cultural tradition. The 37th edition presents the best selection of fantastic and contemporary cinema in the form of long and short films, animation and experimental cinema.

The official opening will begin with The Age of Shadows by Jee-woon Kim. The world premiere will be “TheEvilWithin” (USA), the only film directed by the late Andrew Getty. Award-winning films were also selected from Cannes, Locarno, Venice and Toronto.  Retrospectively, the Taiwanese Action Cinema and a selection of modern Argentine cinema are highlighted.

One of the novelties of this year will be the “Mini Me” section, dedicated to children and pre-adolescent audiences. Apart from all this, the program also includes conferences, workshops and an exhibition.

Tickets: 5 euros (except for the opening and closing sessions)